The thyroid is a gland butterfly-shaped gland located in the front of the neck below the larynx. Cancer of the thyroid can occur in either of the two lobes that are joined together by a piece of tissue called the isthmus. The thyroid gland is quite small and is only about the size of a quarter.

People typically first notice a problem because of a lump in the neck, trouble breathing or swallowing, or hoarseness of voice. Remember that the symptoms you experience might also be caused by other medical conditions so it’s important for you to consult a physician to confirm a diagnosis.

It’s normal for you to wonder how you got thyroid cancer. Although we still don’t have all the answers, we do know that there are risk factors associated with people developing this cancer, especially radiation exposure as a child, family history, and age. Remember that there is no single cause for developing this type of cancer.

Thyroid cancer is much less aggressive than other malignant tumors of the head and neck region. Young people with thyroid cancer typically do very well because the tumors are generally benign, or not aggressive. In older people, thyroid tumors are typically more aggressive but the probability of a cure is still extremely high and even people with very advanced disease usually live for a very long time. 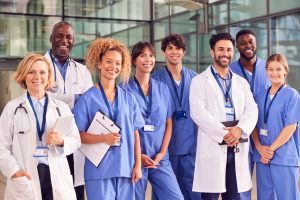 You may need to undergo a number of tests for the screening and diagnosis, which will help your team to assess the stage, or severity of the cancer. Your head and neck specialist will first perform a physical examination to look for signs and symptoms of cancer, and then may order one or more of the most commonly used tests such as ultrasound, biopsy, and nasopharyngoscopy.

[accordion_father][accordion_son title=”Surgery”]Once a diagnosis of thyroid cancer has been made, the treatment is usually surgical: either total removal of the thyroid in what is called a total thyroidectomy, or partial removal of the thyroid during hemi-thyroidectomy. The surgery itself is relatively minor and effectively removes tumors without causing significant problems with swallowing or speaking.

After surgery, some patients will also receive radioactive iodine treatment which is a type of internal radiotherapy. This additional treatment is called adjuvant therapy and is given 6-30 weeks following surgery to help kill any residual cancer cells in the thyroid gland.

Thyroid hormone replacement therapy may also be given to patients to help them maintain normal hormone levels and to slow the growth of residual cancer cells. Radiation (external beam) is infrequently used to treat thyroid cancer and is reserved for large, recurrent or aggressive thyroid cancers.

The choice of partial or total thyroidectomy to treat thyroid cancer depends the surgeon’s and patient’s preference. Partial thyroidectomies are generally reserved for small tumors in young patients. Most patients, however, typically undergo a total thyroidectomy. Although thyroid operations are performed under general anesthetic, the surgery itself is relatively minor and leaves an incision of about 5-10 cm in length at the lower neck at the collar line.

During the surgery to remove half the thyroid, the surgeon will be careful to preserve the recurrent laryngeal nerve that goes to the larynx, the parathyroid glands and their blood supply.  Frozen section diagnosis of the thyroid for patients undergoing surgery is rarely done as it is difficult for pathologists to distinguish between benign and malignant tumors in frozen sections.

Some patients will need to undergo a particular type of selective neck dissection called a central neck dissection. This procedure can occur at the same time as the removal of the thyroid and involves removing the lymph nodes in the central compartment that directly surround the windpipe (trachea).[/accordion_son][accordion_son title=”Radioactive Iodine Treatment”]Radioactive iodine therapy is most commonly used to treat thyroid cancer. The thyroid gland normally absorbs all the iodine in the body, so when patients swallow radioactive iodine, it travels through the blood and is concentrated in the thyroid. There, high-energy waves from the radioactive iodine begin to kill the cells of the thyroid, including the cancer cells.

Your multidisciplinary treatment team will consult with you to explain the dose of radioactive iodine that will best work for your thyroid cancer. Radioactive iodine is generally given in a capsule form.

For cancer of the thyroid is critical and you will need to see your physician on a regular basis. You may also need ongoing therapy for speaking and swallowing problems.