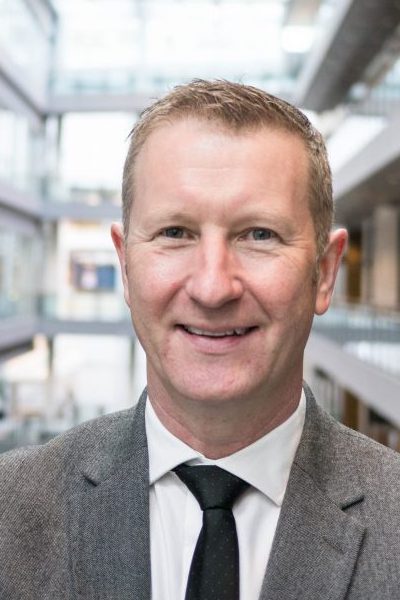 Dr. Neil Bailie graduated in Medicine from the Queen’s University of Belfast with an intercalated honors degree in pathology. He undertook ENT residency training in Northern Ireland, during which he received training from 2 internationally-renowned otologists: Professor Alan Kerr and Dr. Joe Toner. Dr. Bailie combined his ENT residency training with PhD research into computational fluid dynamics prediction of nasal airflow at the School of Aeronautical Engineering, Queen’s University of Belfast. His research provided new insight into the predilection of epistaxis for the anterior nasal septum and was subsequently published as a book. As a result of this research, Dr. Bailie was invited to spend a summer as a visiting scientist at the Chemical Industries Institute of Toxicology in North Carolina. During this time, he was able to significantly improve the computational methods for inhaled nasal toxicology modelling, reducing the time for a single prediction from several months to 2 days. Despite his research background in rhinology, Dr. Bailie found himself increasing drawn to the field of otology during later residency training. He was awarded the Gordon Smyth travelling fellowship to observe and train with Drs. Fred and Robert Owens in Dallas, Texas. In 2006, Dr. Bailie was awarded the prestigious Thomas Wickham Jones Fellowship in Otology and Neurotology, training under Dr. John Rutka, Dr. Jerry Halik, Dr. Blake Papsin and Dr. Adrian James at the University Health Network, Toronto. On completion of his fellowship, Dr. Bailie continued to work at UHN as an otologist and neurotologist under the mentorship of Dr. John Rutka until 2009. In 2009, in conjunction with his late colleague, Dr. David Pothier, Dr. Bailie performed the first endoscopic ear surgery cases at UHN. He then returned to his native Belfast to take up a consultant post at the Royal Victoria Hospital. During his time in Belfast, Dr. Bailie began and led the provincial tertiary referral vertigo service and was responsible for the introduction of modern vestibular testing, including vHIT and VEMP. He also introduced and trained residents on laser-assisted stapedotomy, endoscopic ear surgery and posterior semicircular canal surgery, learned during his time in Toronto, and was later actively involved in the introduction of mastoid obliteration using bioactive glass. As a member of the provincial mutli-disciplinary surgical neurotology service, Dr. Bailie gained extensive experience in the management of acoustic neuromas and other skull base diseases.

Dr. Bailie was recruited back to the University Health Network as an Assistant Professor of Otolaryngology – Head and Neck Surgery in September 2021. He has extensive experience of middle ear and skull base surgery and has a particular practice interest in ossicular reconstruction, laser-assisted stapedotomy, and endoscopic ear surgery. As a member of the multi-disciplinary medical neurotology team, Dr. Bailie also maintains an active practice in the investigation and management of balance disorders. He is passionate about teaching otology to medical students, residents and fellows and has recently been appointed as a mentor for the Peter and Melanie Munk Foundation Fellowship in Otology/Neurotology, together with acting as director for undergraduate medical education in Otolaryngology at Toronto General Hospital. He has also mentored 2 previous PhD’s to completion.

Dr. Bailie maintains an active research interest in both medical and surgical aspects of otology and has a particular interest in vestibular research. His published work includes 1 textbook, 9 book chapters, 31 peer-reviewed pubications and he has presented at over 60 national and international meetings.

During his previous time at UHN, Dr. Bailie worked with Dr. Rutka in the Underserviced Areas Program, providing ENT services to the Northern Ontario communities of Sioux Lookout and Dryden, and he has now returned to this work in Dryden. He has also accompanied Dr. Rutka in working in the Thai Rural Ear, Nose and Throat Foundation, providing otologic surgical care to remote communities in Thailand, and plans to restart this when COVID restrictions permit